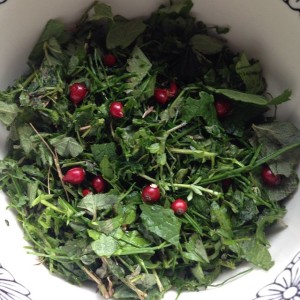 A couple of weeks ago I was craving a salad, full of the sharp and sometimes bitter “weeds” and wild plants of spring. And while there was a little bit of snow on the ground and ice on the waters, I was confident that I could find enough wild greenery that wasn’t frost-bound to make a salad.

Make no mistake, this wasn’t a survival exercise. I just wanted a nice salad, to complement my more traditional wintery offerings of dried and preserved goods and winter produce.

This was a useful test of winter foraging skills. Not only did I have to remember where certain winter greens and herbs grew, I had to think of areas in which they wouldn’t be covered in an inch or more of snow. They would still be perfectly edible, but water-logged and wilted. It was a challenge to my memory of not only wild plants but the landscape around them. I needed perimeters, areas where there was a either shelter from or drainage for the snow. I had to do a bit of looking, but first I had to do a bit of thinking.

I found tiny cleavers (Galium aparine) and patches of chickweed (Stellaria media) peeking their way up from an old field where long dried pieces of last years overgrown grasses provided shelter. Around the bases of trees and other well-drained spots in the woods crept garlic mustard (Alliara petiolata) and the mild leaves of mock strawberry (Duchesnea indica). In my own yard in garden vegetable rows were hairy bittercress (Cardamine hirsuta) and, poking up above the snow and perfectly crisp, field garlic (Allium vineale). Fresh, tiny rosehips made for a perfect garnish, the whole thing being simply dressed with a pinch of salt, some olive oil and just a bit of vinegar.

The salad was delicious, the exercise (in both senses) invaluable. Sometimes it’s worth the extra effort to discover something beautiful in the snow.