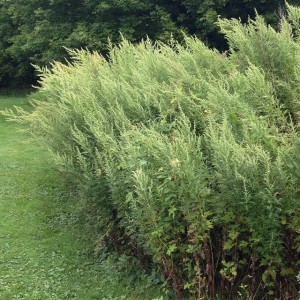 Whether or not foraging is legal varies immensely and is another matter entirely. Certainly, if we think of ourselves as feeling individuals the first question to ask is this one : is it even right?

If I’m no authority in foraging or cooking or gardening than I’m certainly no authority on morality. But I feel everyone who would venture to forage needs to answer this particular question for themselves. In the hopes that it helps people feel comfortable about coming to their own conclusions, I will describe what my answer is, and how I came to it.

There is an old foraging tradition that every writer on the subject usually rolls out. The tradition is one that many of the Native American tribes–the original and greatest North American foragers–utilized when searching for medicinal plants. They would go out in search of a particular plant. When they found the first specimen of the plant they were searching for, they would bury a piece of tobacco beneath it. Then they would meditate on the plant, its’ characteristics and virtues and then go out in search of others.

It is doubtful to me that this applied when the tribes were stocking up on food plants. This is the kind of ritual that only becomes necessary when dealing with the world of the unseen. But in our peculiar situation today as modern foragers, it is one that we would do well to apply to all plants. Especially if one is “finding” a plant for the first time. We can probably dispense with the burial of tobacco at the base of the plant. What we cannot do without is the meditation. This is a clear code : serious study of the plant and its attributes. Attention to the details of its structure and growth. And meditation on the essential “thatness” of the plant in question.

Once one has performed this little ritual and securely identified a plant, then it is time to look around. Is there a community of this plant? Is it large or tiny? Do we now realize that we have seen this plant a million times in a million places? Or is it something uncommon, even rare?

There is no replacement for understanding the size of a community of wild plants before beginning to eliminate them. There is no excuse for not researching a particular plant and finding out its’ viability in your area before culling the herd.

The first thing, though, is to understand the plant. More often than not, a new plant suddenly becomes a familiar friend to me. I remember all the times I saw it and it was just one of “the weeds in the field.” If this doesn’t happen, if you know what something is and don’t immediately know its’ level of abundance in your environment, than it’s time to do more research.

Many of the plants we look for when foraging (and the vast majority of the ones I will be talking about on this site) are abundant, often invasive, sometimes actually serious environmental threats. Many others are often ignored, even by most birds and wildlife. Some others (such as milkweed) represent particular ecological concerns, which must be addressed in very specific ways. A careful study of each plant you care to collect should be made in turn.

The very question of whether or not it is “right” to take things that don’t “belong” to you is one I take seriously. I admit to being made mildly uncomfortable by things like fallen fruit maps and some of the wild food maps. The idea of mapping plant communities I am solidly behind, but it shouldn’t be put forth as “free shit.” Especially when said free shit grows in somebody’s yard. I think I would be pretty damn annoyed if I planted a bunch of citrus trees (which I absolutely would do if I lived in a tropical location) and went out one day to find the ones overhanging the walls crawling with hippies snatching up my pomelos. If they’d only asked I would have shared. That I am solidly behind. Share, ask, talk to your neighbors when you see their apples or chestnuts rotting on their lawn. They might be made glad simply not to have to run over the things with a lawnmower.

This really depends on the nature of the space. No one should be foraging anything from a nature preserve or wildlife preserve. Old abandoned fields? Preserved open spaces? State parks? When it comes to those spaces the rule of abundance applies (as well, of course, as your local and state laws)–understand your ingredient before you harvest it. Find a large community. Make sure it isn’t critical to the local wildlife (this is usually an easier thing to ascertain than it might immediately seem). It goes without saying you wouldn’t be looking for something that was threatened or endangered in your area in the first place.

If you feel you’re not creating a negative impact on the environment, harvest a small amount if its new to you or a reasonable amount if it’s tried and true. There’s never any reason to go overboard. Take only what you know you will use. Take some to experiment with, as long as you will experiment. Make it important.

Assuming you enjoy the particular food in question, your role changes. Now, not only have you become a collector of wild food, you’ve become aware of what that plant or mushroom is doing in the area where you found it. Now you’ve on your way to becoming a minder, a custodian of that plant. If you love nettles, the last thing you’re going to do is let them disappear from your favorite areas. You’re going to encourage them. You’re going to make sure they thrive, so there will always be plenty. Plant lovers have been known to throw the seeds of their favorites in areas where the present populations seem threatened. Mushroom freaks spread spores, naturally.

The “big” question of whether foraging is ethical gradually became unravelled and finally nonsensical the more I studied foraging. The more we appreciate and use the abundance of wild food and medicine around us, the more we become strongly conscious of protecting it. There are surely exceptions, but a fairly widespread ethical streak runs through the heart of the foraging community. That’s really all that can be said–it is ethical if we all keep it that way.

If we really care for this world and these things that we make our food with, we can hardly do otherwise.